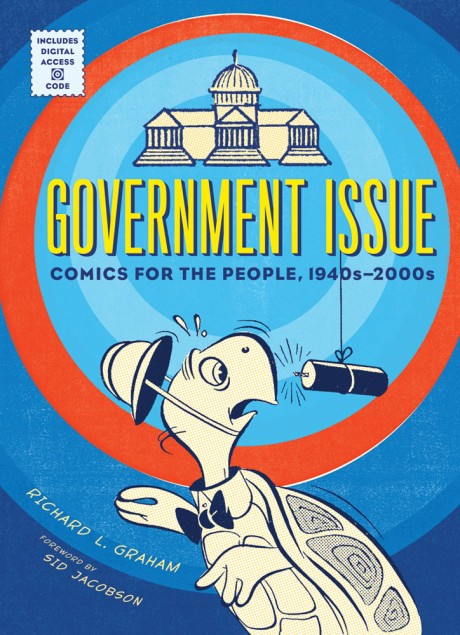 Since the 1940s, federal and state government agencies have published comics to disseminate public information. Comics legends Will Eisner and Milton Caniff produced comics for the army. Li’l Abner joined the navy. Walt Kelly’s Pogo told parents how much TV their kids should watch, Bert the Turtle showed them how to survive a nuclear attack, and Dennis the Menace took “A Poke at Poison.” Smokey Bear had his own comic, and so did Zippy, the USPS mascot. Dozens of artists and writers, known and unknown, were recruited to create comics about every aspect of American life, from jobs and money to health and safety to sex and drugs. Whether you want the lowdown on psychological warfare or the highlights of working in the sardine industry, the government has a comic for you!
Government Issue reproduces an important selection of these official comics in full-reading format, plus a broad range of excerpts and covers, all organized chronologically in thematic chapters. Earnest, informational, and kitschy, this outstanding collection is the ultimate comics vox populi.

“Public-service comics never looked so good.” —Cleveland Plain Dealer
“The book includes work by Neal Adams, Denis Kitchen, Milton Caniff, Walt Kelly, and other big names, all producing pages paid for by American taxpayers, many of whom never even got to see [them]. Now, at last, we have that chance.” —A.V. Club

“A gold mine of the serious, the silly, and the truly strange stuff the government thinks we ought to know.” —Scripps Howard News Service

Richard L. Graham is an associate professor and media services librarian at the University of Nebraska-Lincoln. He created and curates UNL’s digital collection of government comics.