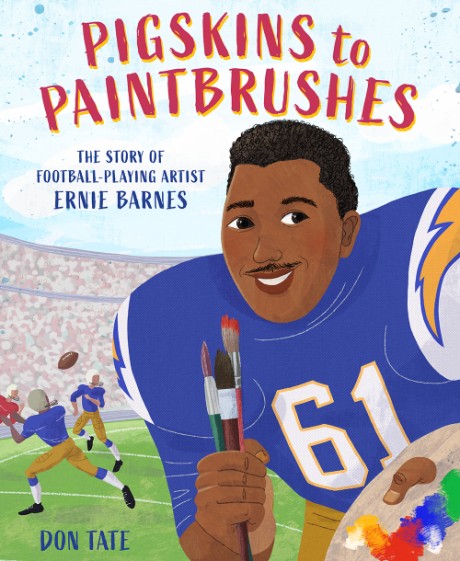 
He realized how football and art were one and the same. Both required rhythm. Both required technique. Passing, pulling, breaking down the field—that was an art.

Young Ernie Barnes wasn’t like other boys his age. Bullied for being shy, overweight, and uninterested in sports like boys were “supposed” to be, he instead took refuge in his sketchbook, in vibrant colors, bold brushstrokes, and flowing lines. But growing up in a poor, Black neighborhood during the 1930s, opportunities to learn about art were rare, and art museums were off-limits because of segregation laws. Discouraged and tired of being teased, Ernie joined the school football team. Although reluctant at first, he would soon become a star.

But art remained in Ernie’s heart and followed him through high school, college, and into the NFL. Ernie saw art all around him: in the dynamic energy of the game, the precision of plays, and the nimble movement of his teammates. He poured his passion into his game and his craft, and became famous as both a professional athlete and as an artist whose paintings reflected his love of the sport and celebrated Black bodies as graceful and beautiful.

He played for the Baltimore Colts (1959–60), Titans of New York (1960), San Diego Chargers (1960–62), and the Denver Broncos (1963–64). In 1965, Barnes signed with the Saskatchewan Roughriders in Canada, but fractured his right foot, which ended his professional football career. Soon after, he met New York Jets owner Sonny Werblin, who was impressed by Barnes and his art. In 1966, Barnes had a debut solo exhibition in New York City, sponsored by Werblin at the Grand Central Art Galleries; all the paintings were sold. Barnes became so well-known as an artist that one of his paintings was featured in the opening credits of the TV show Good Times, and he was commissioned to create official posters for the Los Angeles 1984 Summer Olympics.

From award-winning author and illustrator Don Tate, Pigskins to Paintbrushes is the inspiring story of Ernie Barnes, who defined himself on his own terms and pushed the boundaries of “possible,” from the field to the canvas.

The back matter includes Barnes’s photograph and his official Topps trading card. Also included are an author’s note, endnotes, a bibliography, and a list of websites where Barnes’s work can be seen.

"Tate weaves Barnes’ own voice into his smoothly told narrative, to great effect. Will inspire young readers to stay true to themselves."
Kirkus Reviews —

"Tate’s tale illuminates the structural and social obstacles Barnes faced—from intense peer pressure to the adult Barnes’s longed-for first trip to an art museum, where he was told “your people don’t express themselves this way”—and clearly highlights the idea that there need be no division of interests between arts and sports."
Publishers Weekly —

"It is impossible to tell the story of a Black American artist born in the 1930s without discussing segregation and racism, and Tate weaves those threads seamlessly into his narrative, drawing particular attention to the moment when Barnes exhibits his work at the North Carolina Museum of Art, a place where he had once been told by a docent that “your people don’t express themselves this way.”"
The Horn Book Magazine —

Don Tate is an award-winning author and the illustrator of numerous critically acclaimed books for children, as well as a founding host of The Brown Bookshelf. His accolades include two Ezra Jack Keats Awards and an Honor, the Carter G. Woodson Book Award, Christopher Award, Lee & Low New Voices Honor, and Texas Bluebonnet Award Master List selection, among many others. A native of Des Moines, Iowa, Tate currently resides in Austin, Texas, with his wife and son.