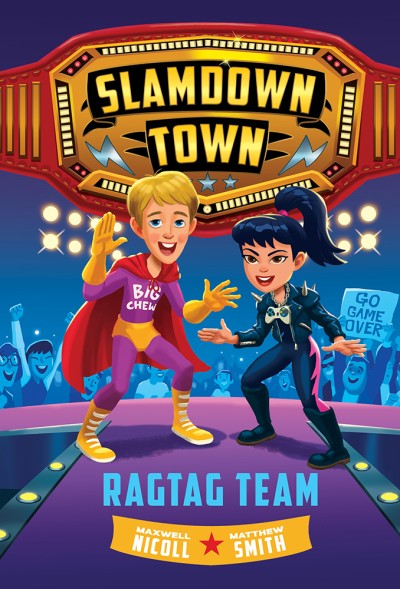 Ollie and Tamiko saved Slamdown Town, and wrestling is popular again! The rise in popularity draws two newbies to the ring: the Krackle Kiddos, Linton Krackle’s son and daughter. They may be puny middle schoolers, but they’re somehow unbeatable. Something’s fishy about Linton’s kids…and it’s not just the prize crackle fish on display at Krackle Manor.
Soon the son and daughter of the Slamdown Town CEO are changing the arena into something it’s not. This identical duo is up to no good, and no one—not even the The Referee or Werewrestler—can stop them.
No one, that is, until Tamiko transforms into Game Over—the combo-savvy wrestler with a flair for turning her opponents into a pile of pixels. When Ollie joins Game Over as Big Chew, the two best friends become the Ragtag Team. They determine to find out the truth behind the Krackle Kiddos’ winning streak and give them a run for their money in the ring while they’re at it. Being tag team partners with your best friend is awesome…but when it comes down to it, can Ollie and Tamiko make for the kind of winning combo that sniffs out clues and takes down the competition?

Maxwell Nicoll and Matthew Smith are writing partners, screenwriters, and graduates of the School of Visual Arts.