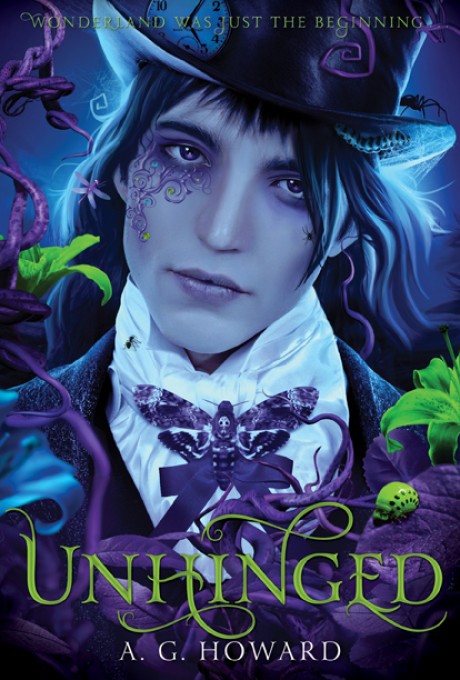 Alyssa Gardner has been down the rabbit hole. She was crowned Queen of the Red Court and faced the bandersnatch. She saved the life of Jeb, the boy she loves, and escaped the machinations of the disturbingly appealing Morpheus. Now all she has to do is graduate high school.
That would be easier without her mother, freshly released from an asylum, acting overly protective and suspicious. And it would be much simpler if the mysterious Morpheus didn’t show up for school one day to tempt her with another dangerous quest in the dark, challenging Wonderland—where she (partly) belongs.
Could she leave Jeb and her parents behind again, for the sake of a man she knows has manipulated her before? Will her mother and Jeb trust her to do what’s right? Readers will swoon over the satisfying return to Howard’s bold, sensual reimagining of Carroll’s classic.

Read all the books in the New York Times bestselling Splintered series: Splintered (Book 1), Unhinged (Book 2), Ensnared (Book 3), and Untamed (The Companion Novel).
Get books 1 through 3 in the Splintered boxed set, available now!

Praise for Unhinged
"I really enjoyed the first book of this series, but Unhinged cranks the Wonderland experience up to 11. It's just ... WOW! The last few scenes dangle Alyssa's next adventure with shockers enough that I found my jaw needing a bit of assistance in coming off the floor. Write quickly, A.G. Howard! I need that next book!"
--USA Today

"As intense, dark, and weird as the first volume, this worthy sequel creates a parallel narrative that brings the action out of Wonderland and into Alyssa’s hometown."
--The Bulletin of The Center for Children’s Books

"A dark beauty fills the novel's pages, which will mesmerize teens with a taste for magic, romance or suspense. Unhinged lays the groundwork for a third book where anything could happen--it is Wonderland, after all."
--Shelf Awareness

"Fans of dark fantasy, as well as of Carroll’s Alice in all her revisionings (especially Tim Burton’s), will find a lot to love in this compelling and imaginative novel."
—Bulletin of the Center for Children's Books

"Alyssa is one of the most unique protagonists I've come across in a while. Splintered is dark, twisted, entirely riveting, and a truly romantic tale."
—USA Today

"Brilliant, because it is ambitious, inventive, and often surprising — a contemporary reworking of Lewis Carroll’s “Alice’s Adventures in Wonderland,’’ with a deep bow toward Tim Burton’s 2010 film version."
—The Boston Globe

"It’s a deft, complex metamorphosis of this children’s fantasy made more enticing by competing romantic interests, a psychedelic setting, and more mad violence than its original."
—Booklist

" Protagonist Alyssa...is an original. Howard's visual imagination is superior. The story's creepiness is intriguing as horror, and its hypnotic tone and setting, at the intersection of madness and creativity, should sweep readers down the rabbit hole."
—Publishers Weekly

"While readers will delight in such recognizable scenes as Alyssa drinking from a bottle to shrink, the richly detailed scenes that stray from the original will entice the imagination. These adventures are indeed wonderful."
—BookPage

"Attention to costume and setting render this a visually rich read..."
—Kirkus Reviews

"Wonderland is filled with much that is not as wonderful as might be expected, and yet, it is in Wonderland that Alyssa accepts her true nature. The cover with its swirling tendrils and insects surrounding Alyssa will surely attract teen readers who will not disappointed with this magical, edgy tale."
—Reading Today Online

A. G. Howard wrote Splintered while working at a school library. She always wondered what would’ve happened had the subtle creepiness of Alice’s Adventures in Wonderland taken center stage, and she hopes her darker and funkier tribute to Carroll will inspire readers to seek out the stories that won her heart as a child. She lives in Amarillo, Texas.